SAMBALPURI BASTRALAYA : THE PIONEERING INSTITUTE. It was registered as a Handloom Co-operative Society under the Odisha Co-operative Societies Acts & Rules during the year 1954. The credit for starting the society goes to Padmashree Dr.Krutartha Acharya whose contribution to Odisha’s Handloom Sector has been second to none. It started its business with effect from 1.7.1954 with an objective to produce high quality handloom fabrics through its members, its affiliated societies and production agents and arrange to market their products. It has played outstanding role in preserving and propagating the World famous typical Sambalpuri technique of tie and dye (IKAT) in Handloom and promoting Handloom Industry in Odisha. The institution being a leading one in the State is widely known for its efficient commitment for the up-liftment of Schedule Cast, Shedule Tribe and economically backward classes of the society including women. More-over it provides opportunities for the rural based employment in a large scale. It has earned national & international reputation because of high business ethics of its founder Padmashree Dr. Krutartha Acharya. It also plays an important role in the socio-economic development of weavers of Western Odisha. 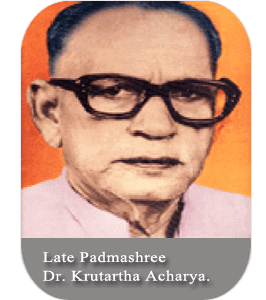 Extending the districts of Bargarh and Sambalpur. Besides it is providing work to the weavers of Bolangir and Sonepur Dist. & members of 90 affiliated weavers societies of the state.